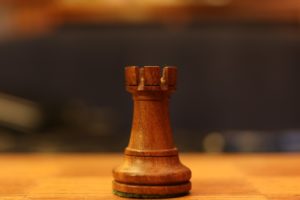 There are so many different types of imbalances that can occur in chess that it is difficult to have specific knowledge about everything. When you find yourself in one you haven’t studied, it is best to break the position into chunks you do understand, and then add in the other aspects of the position.

This situation arose in my 4th round game of the 1995 Colorado Open against SM David Gliksman (Lucky) when we exchanged down into a rook and knight vs. rook endgame. (See the article, “A Long Day’s Journey into Knight,” in the January 1996 CSCA Informant or in the Articles Section under CSCA Informant on www.ColoradoMasterChess.com).

This twelve-hour game holds the Colorado record for the longest game between masters and is unofficially the longest continuous game (without an adjournment) between masters in United States (according to a couple of older GM columnists I consulted).

The game started at 5:00 p.m. on Sunday, September 5, 1995, and seven hours later, around midnight, we ended up with a rook and knight vs. rook endgame. As the last pawn was captured, I starred the move on my score sheet and started the 50-move count.

In most cases the R+N vs. R is a theoretical draw, but the strong side has virtually no losing chances and there are plenty of opportunities for the weak side to go wrong.

Half a dozen years or so before this game, David drew the R vs. R+N endgame against GM Christiansen in the American Open in Los Angeles. Christiansen didn’t press too hard to win as he had another game scheduled to play an hour later. David was also familiar with a game earlier that year where GM Walter Browne won a R+N vs. R endgame against SM Thomas Wolski in a sudden death time control. The ending is difficult for the weak side, but theoretically drawable. David chose to test my endgame play (and endurance!)…as world-class players have lost this endgame.

More recently, Game 4 of the 2000 World Championship Match between Kasparov and Kramnik also resulted in a R vs. R+N endgame which was drawn, with Kramnik on the strong side with the knight.

Since I had never studied this particular ending, I tried to figure out whether or not I had practical drawing chances in it back when there were more pieces and pawns left of the board. Often the best way to figure out a position you don’t understand is to start with something you do know, and work backwards from there. Of course, if I was to lose, the basic checkmate position with a rook would look something like this: 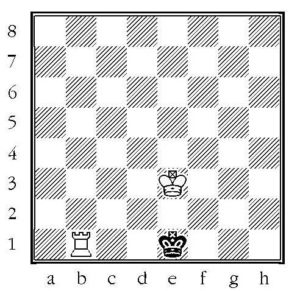 Black still has a rook and White has a knight to add to the board. Black, of course, doesn’t want to get checkmated, so his rook would try to perpetually check the White king as Black closed in on a mating position. White would have to interpose his knight to avoid the annoying checks. Adding these pieces, the basic position before potential mate might look something like this: 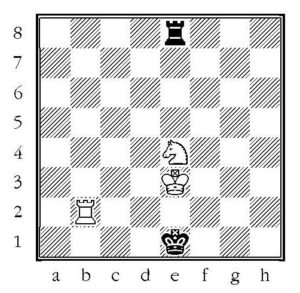 Observe that the knight attacks both d2 and f2, squares already covered by the White king. Notice the knight only acts as a shield in this case, and doesn’t take away more flight squares, like perhaps a bishop would (a bishop on e4 would also attack c2 and g2 making it more difficult for the Black king to escape). Black doesn’t want to allow Rb1 mate, so he could run his king to d1 or f1 to escape the back rank mate.

A couple other keys to the position for Black are to try to avoid moving his king into the corner, try to keep his rook as far away from his king as possible so as to avoid knight forks, and try to keep flexibility in his rook’s position so that he check from either ranks or files, whichever is best at a given moment.

If you want to delve into this type of endgame in painful detail, a good source is “Secrets of Pawnless Endings” by John Nunn.

Below is the R+N vs. R endgame between David and myself and then same endgame where both GMs Judith Polgar and Alexander Onischuk both failed to hold the draw. 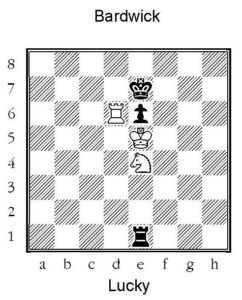 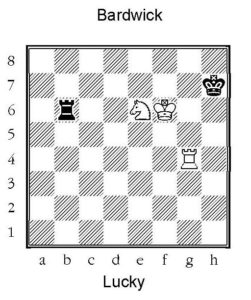 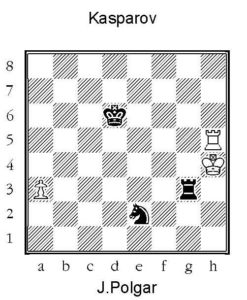 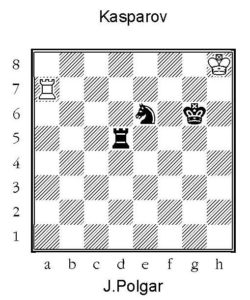 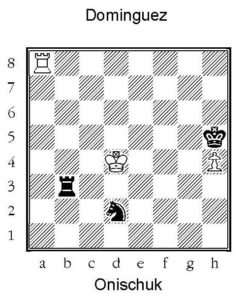 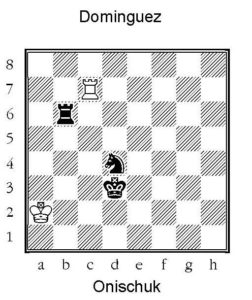 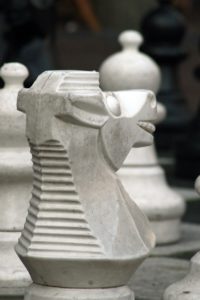