Do you know what the glue was that held The Orange Crush Defense together? You guessed it, chess.

In an interview at his desk just outside the weight room at Dove Valley about eight years ago, Barney Chavous told me that “Chess really brought closeness to the team back in those days.” 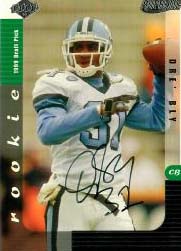 Chess has resurfaced in the Broncos locker room, and cornerback Dre Bly rules the roost.

On September 12, I visited the locker room to interview Bly for my chess column in the Rocky Mountain News.

On a large wooded chess board on a table in the center of the defensive side of the locker room, I watched Bly was crush Andre Hall with the black pieces.

Bly has only been playing chess for four years, and has a good grasp of the game: he develops his pieces to logical squares and exhibits good chess fundamentals. With a few tips to improve his game, I would guess that Bly would have a playing strength in the Class C range.

Since joining the Broncos earlier in the year, Bly has won well over a hundred games with only a dozen or so losses. And he isn’t shy announcing he plans to improve his record!

Bly’s chess style is what you would expect of a Pro Bowl cornerback: he calculates what his opponent is threatening and does a good job of anticipating what he opponent will do next.

After the Hall-Bly game, I played a couple games against Ian Gold, who is one of the nicest guys you would ever want to meet.

Bly and I then played a few moves. He avoided a couple traps I set for him and I could only obtain the small advantage of doubling his f-pawns, before he was called away to a team meeting.

This was my third Broncos chess interview – the first two with Reggie Rivers and Barney Chavous – can be found on the Rocky Mountain News link on www.ColoradoMasterChess.com.

So how would I rank the Broncos in terms of chess strength? My guess is the top three in order of strength would be Bly, Alfred Williams, and Barney Chavous. Chavous is better than Reggie Rivers and he told me that Williams eventually got stronger than him by playing extensively against his computer.

Here is the end of Bly’s game against Reggie Rivers played on August 22nd  that was aired on the Channel 4 pregame show before the exhibition game against the Cleveland Browns. 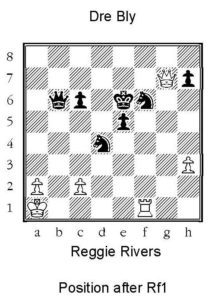 (Please do not call the Broncos to challenge them to a chess game. The players put football first, and play chess amongst themselves for competition and relaxation and from a busy schedule.) 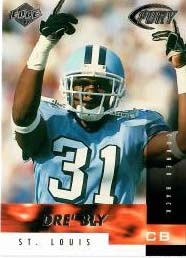